Excal is using RFID to automate the way it manufactures brass and bronze products, thus helping it to improve their consistency and quality.

Jan 21, 2010Brass and bronze foundry Excal is improving the efficiency and quality of its manufacturing process. The company makes a variety of metal products to order, with thousands of different types of products in various sizes and shapes. One major step in the manufacturing process is the making of cores—used to form cavities in molded brass or bronze products. By employing radio frequency identification, the company can ensure that a core is made correctly, thereby resulting in a higher-quality final product. This, says Mike Baures, Excal's plant manager, better positions the firm to compete with low-priced overseas foundries that can not guarantee such high quality.

Cores are produced by injecting sand and an amine catalyst into molds called core boxes, which are composed of a variety of materials, including wood, urethane or iron. To create a core, a foundry blows sand into a mold, followed by a catalyst—which acts as a glue, holding the sand together—using a "recipe" that includes the amount of sand, amine, pressure and heat. Once the core hardens, the box is disassembled, and the core is removed and placed in another mold used to produce the desired metal object. Molten metal is then poured into that mold, which flows around the core, resulting in a cavity. The heat of the molten metal breaks down the binder in the core, and the core disintegrates into loose sand that can be poured out of the cooled metal. 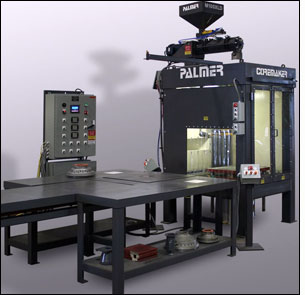 When manufacturing a core, foundry workers typically must adjust the settings—often experimenting, or simply recalling the settings used for a similar sized and shaped mold for the same metal. Excal has approximately 2,000 different patterns for various sizes and shapes of cores. To improve on this system, the company began working with Palmer Manufacturing, which produces the core-making machines it uses. The result is the new RFID-enabled CoreMaker core blower.

First, a worker bolts a passive 13.56 MHz RFID tag to the bottom of each core box. The tag complies with the ISO 18000-3, ISO 15693 and ISO 14443 standards. Thus far, Excal has been employing just 10 tags, which have been used on a variety of boxes. After its staff gets accustomed to the system, the company plans to expand the system to tag more boxes. Each tag is encoded with a unique ID number that is read when the mold is placed on a workbench that is part of the CoreMaker.

To set up the system, a worker first reads the ID number encoded to a core box's tag, and then inputs the settings for that particular core box into the machine's programmable logic controller (PLC). In that way, says Palmer Manufacturing's CEO, Jack Palmer, "They can figure out the best setting, enter it into that job's recipe and save it. Then it's permanently stored" for that core box.


To initiate the tag read, a worker places a tagged core box on the core maker and presses a button on the machine. The RFID interrogator built into the machine's workbench reads the box's tag ID number, and transmits that information to the PLC, which links the number with settings related to producing that specific core. The employee then presses another button to begin the core-making process, and the box is moved into the core blower on a conveyor. The PLC instructs the blower as to the required settings, and begins the process of injecting first sand, and then chemicals, before purging the box (by blowing out residual gas and sand)—all at settings preset for that specific item.

By using the RFID function, Baures says, productivity is increased, by minimizing the time required for human intervention.

The cost of the RFID-enabled CoreMaker is approximately $20,000 more than for standard CoreMaker machines, says Palmer, whose company has been marketing the system commercially since 2009. He says he foresees the system being marketable to any foundry that manufactures a variety of metal products.

Since Excal has begun using the system, Baures says he has not yet measured the reduction in labor for core-blower operators, but his greatest interest is in making higher-quality cores, thereby leading to a higher-quality product. When workers manually experiment with recipes, he explains, the core's condition is variable. For example, a core could contain excessive amine catalyst material, which could be weakened by the heat of the molten metal and cause the core to break up. The core could also cause veining of the metal into the core if it fractures and molten metal seeps into the cracks. With the RFID-enabled CoreMaker, he indicates, the core is guaranteed to be manufactured with the proper settings, and the quality of the metal product molded around it can then be guaranteed as well. If something goes wrong, he notes—such as a core fracturing—the foundry has a record of which settings were used to produce that core, and can then make appropriate adjustments.

"It's a neat tool," Baures states. "Hypothetically, RFID could be used for any job process we have."