Building IoT Devices Is a Snap for Startup Interstacks

The Pennsylvania company has developed a modular system with Lego-like blocks that enable sensor-based tracking and wireless connectivity for un-networked industrial machines, with RFID functionality in the works.

Jun 14, 2017Many new industrial machines are being built with intelligence to enable Internet of Things (IoT) connectivity, but millions of machines are still in operation that have no such connectivity. A group of engineers from Carnegie Mellon has created a company offering a product they developed that is intended to get old machines to speak up.

Their Pittsburg startup, known as Interstacks, is offering a modular IoT-based system that snaps together like Lego blocks, allowing users or systems integrators to simply plug blocks of functionality together to build a system featuring sensors and wireless connectivity, the way they want it. That stack of blocks can then be attached to a machine to connect it to a network. 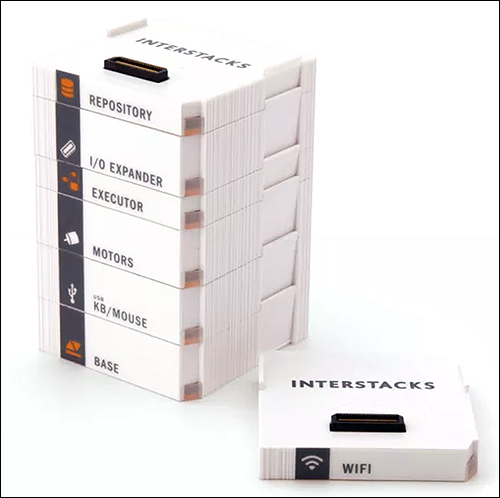 Users can plug blocks of functionality together onto a Superbase, in order to build a system incorporating wireless connectivity and sensors.

Several dozen industrial companies are now piloting the technology to track conditions around their facilities, and especially the machines within those facilities.

Interstacks offers a variety of blocks that can be used; the only requirement is a base block, known as the Superbase, which serves as a CPU. The blocks that can be built onto that base provide a variety of functions. For instance, a Wi-Fi block enables transmission to a Wi-Fi server, while an HDMI block allows an external display to be attached to the device, an infrared remote block can enable infrared capability, and an I/O expander block enables LED lights, sensors and switches to be added. The company soon intends to release a cellular-based block, and is currently working on a UHF RFID-based block.

The company sought a solution to the thousands of machines in industrial settings that are not in any network, but must be tracked for functionality, maintenance or inventory-management purposes. Once a machine is part of an IoT system, Kiliany explains, there are many software developers that can create a system for a company to monitor equipment. "Even though there is a lot of software talent, there is very little hardware talent out there," he says. Therefore, the firm aimed to put together a low-cost and easy set of hardware tools to get data onto a network.

Each stack consists of blocks measuring 2 inches by 2 inches, each with its own function, and each able to be plugged into the next to create a single system. Users can create software using Python programming via a visual authoring tool called a "Stackbuilder" to write applications for the device. 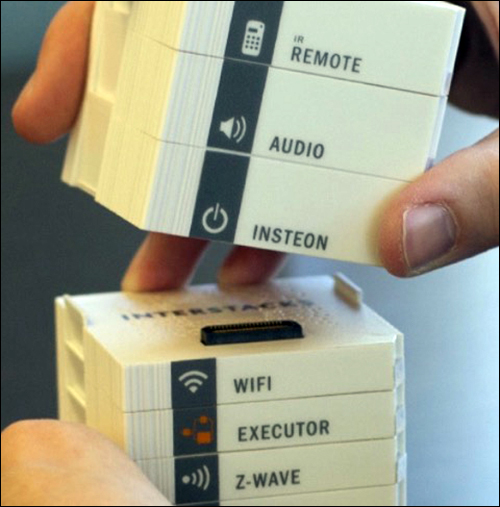 The Superbase module plugs into a laptop via a cable, and comes with eight gigabytes of flash memory. Users can create the stack for a particular functionality in the app, and then load data into the base model's memory. Once the blocks have been put together and the application has been loaded into the Superbase's memory, it can be attached to a machine. The blocks can be powered via either a power outlet plug or an internal battery.

A typical installation example, Kiliany says, might be a stack to monitor a pump used at a water-treatment facility. Users can attach blocks, such as vibration, pressure or power consumption sensors, and a Wi-Fi module. The company offers mounting brackets for standard metal DIN rails (a type of metal rail used to mount industrial control equipment and circuit breakers inside equipment racks).

The sensors begin collecting data, which is stored in the base module and forwarded via the Wi-Fi or cellular connection block to the server, where the software can then store and manage that information. In the event of a pump failure or a decline in functionality, the sensors would capture a change in conditions and forward that information to the software, which could then trigger an alert, such as an e-mail or text message to a facilities manager.

In the future, when blocks come with RFID- or ZigBee-based functionality, they will also be able to read RFID tags, or transmit and read data between each other. The devices can be networked together in a single system in the software, and be programmed to send and receive data wirelessly back and forth.

There is no technical limit to the number of blocks that can be attached to a stack, Kiliany says, and the blocks can be attached in any order. "The only rule is that every stack has a base," he states.

Interstacks is currently working with systems integrators that are providing the stacks to their own industrial customers. The technology is priced at between $50 and $100 per block, though the cellular-enabled block costs $300. The Superbase is priced at $90.

Although the company has not yet developed a Bluetooth Low Energy (BLE)-enabled block, Kiliany says, it might be in the works in the future. "We haven't had a project that's called for BLE yet," he states, "but we think that the technology is useful," especially for applications involved in locating parts or pallets, if customers express an interest in that application.

So far, Kiliany says, module blocks have been designed and released based on customer requirements. "Interstacks is really a generic, rapid hardware-building tool set that you can apply in so many verticals," he explains. While the technology was initially developed to get "old machines talking," systems integrators and end users are coming up with more innovative ideas regarding the hardware's use. That's the beauty of the modular approach, Kiliany says, adding that without the stack, "all you can have are fixed closed boxes" for specific functionality. "It's hard to be creative with that. I think the market needed a flexible tool like this to generate ideation."