At the Honey Bunches of Oats-sponsored event, the company distributed boxes of cereal, along with NFC RFID cards that directed phones to questionnaires and downloadable music and videos.

Jul 19, 2013Post Foods recently tested a Near Field Communication (NFC) radio frequency identification solution at a concert held in Miami, so that it could learn more about its customers, as well as provide them with access to music and videos. The marketing campaign, offered to every attendee at the event—the final leg of a multi-city Honey Bunches of Oats-branded summer concert series dubbed El Tour Positivo (The Positive Tour)—gained a response via NFC technology from 14 percent of the 700 attendees who received NFC-enabled cards along with cereal samples. That participation rate surprised even technology provider Camintel. The company delivered its NFC-based software platform on its own server, which consumers could access via the tap of an NFC phone, or by scanning a QR code or inputting a URL at a special Web site, says Camilo Sandoval, Camintel's CEO. In addition, a large majority of those who availed themselves of the offer did so with NFC technology, which he says indicates that a growing number of people not only have NFC-enabled phones but are learning how to use them.

Mike Foley, Post Foods' senior brand manager, says his company performs "a lot of test and learns" of emerging technologies, as part of its effort to employ new marketing tactics. The firm was interested in NFC and thus met with Camintel, a New York City startup that develops NFC-based applications and solutions enabling businesses to share data with consumers via NFC phones, in a technique known as engagement marketing (directly engaging consumers to participate in a brand's evolution, rather than simply sending messages, such as coupons or advertisements, to passive receivers). Camintel provided its software, via a cloud-based server, as well as the NFC tags, and also printed the cards in which the tags were embedded. 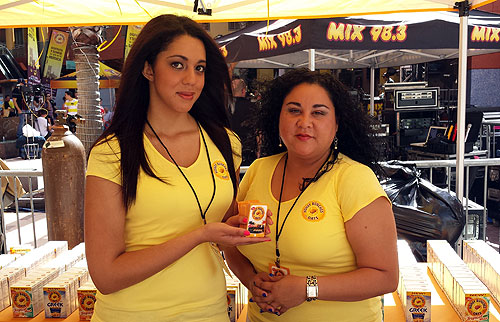 At the Miami concert, "Bunchecitas" handed out NFC RFID cards, along with sample boxes of Honey Bunches of Oats cereal.

For the past several years, Post Foods has hosted the Tour Positivo summer concert series throughout the United States to target Hispanic consumers, and to gain customer interest in its products, while simultaneously providing attendees with musical entertainment. This year, as in 2012, the music tour was produced by Univision, which plans to air clips from the concert on its own music award program, Premio Lo Nuestro, as well as making it available for Post advertising.

This year's concert series featured Venezuelan pop-music duo Chino y Nacho, Foley says, and drew a largely Hispanic audience. During the concert, samples of the cereal were handed out to interested attendees. Accompanying those boxes of cereal were cards printed with the words "¡Descubre Más!" (Discover More!), similar in size and dimension to a playing card, with a built-in Smartrac BullsEye 13.56 MHz high-frequency (HF) NFC RFID tag made with an NXP Semiconductors NT203 chip. Instructions were printed on the card, in both English and Spanish, explaining the four-step process involved in using the technology. The samples and cards were distributed by Post Food's "Bunchecitas," who also provided explanations about how the technology works. "Bunchecitas" is a play on the word "bunches" (as in Honey Bunches of Oats) and the Spanish word bonche—a common Puerto Rican term for a gathering of people or a party, according to Lili Gil, a cofounder of XL Alliance, a marketing firm that supplied content for the campaign.

The solution did not require users of NFC-enabled phones to download an app. Instead, they simply tapped their phone against the card, and the phone's reader captured that card's unique identifier and accessed the URL associated with the Post Foods concert. There, they were prompted to answer a three-question survey about Post Foods cereal. Once the questionnaire was complete, a URL was opened on the phone, providing video and music streaming, as well as concert updates, which resided on Camintel's server. Users could then load three Chino y Nacho songs onto their phone, stream the music or access the videos.

Concertgoers could take the cards home and use them again. Once an attendee had completed the questionnaire, the software recognized that action, associated it with that individual's specific phone and thereby ensured that if the card was reused, he or she would not need to answer the questions a second time.

Altogether, the company reports, 22 percent of the cards were activated, the majority via NFC technology. That 22 percent also included 4 percent who used a QR code to access the data and music, and 4 percent who input a URL. 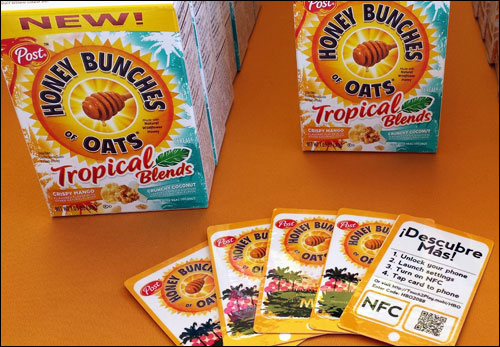 Of the attendees who activated their "¡Descubre Más!" promotional cards, 64 percent utilized NFC RFID technology to do so, while only 18 percent used QR codes and 18 percent manually typed in a special URL.

As a result, Foley says, consumers engaged in the brand by filling out questionnaires and then viewing brand advertising on their phones. However, he notes, since the technology was simply being tested for the Miami event, the full benefits of employing Near Field Communication for marketing have yet to be explored.

"It's an emerging technology," Foley says of NFC, "and we wanted to see what consumer acceptance would be. I was pleased with how many consumers even knew about NFC." Although most consumers still seemed unfamiliar with the technology, he adds, those with NFC readers built into their mobile phones were quick to learn about it. According to Foley, Post Foods now intends to test the NFC solution at another location, and eventually hopes to include payment options as well. For example, a concertgoer could use an NFC-enabled phone to pay for a box of cereal or other product, thereby eliminating the need for a point-of-sale installation.

Camintel, founded in 2012, offers its technology as a bilingual solution, providing consumers with printed text, as well as digital data, in both English and Spanish. The company focuses on mobile phone-based marketing strategies, and has developed an NFC-based app, known as Touch2Like, that companies can use to link consumers to details about their business or coupons and incentives, by enabling potential customers to read a tag and be directed to corresponding marketing or promotional data.