Mar 04, 2013A modern and efficient supply chain can no longer be imagined without an automatic-identification system. Due to cost reasons, radio frequency identification in the ultrahigh-frequency (UHF) band is increasingly employed during production, with industrial environments posing difficult challenges for radio technology. For industrial use, new readers were specifically equipped with a number of groundbreaking functions.

A radio frequency identification solution is always made up of two elements: a data medium (a transponder or smart label) and a read-write device (a reader, also called an interrogator). The transponder is the information carrier, and is attached to the object to be identified. The reader interrogates the information on the transponder, forwards it to higher-level systems—such as controllers—and, if needed, writes data back to the transponder. With UHF RFID systems, the information transfer between reader and transponder takes place by means of radio waves, as is the case with a radio or mobile phone.

Due to the long transmission range of several meters, UHF systems were, until now, typically employed for logistics applications. Increasingly, though, these systems can also be found within industrial production facilities. The reasons behind this trend are the continuous identification of objects throughout the production process, as well as the availability of inexpensive transponders (labels) that are disposed of at the end of the process. Since there is no need to monitor and look after reusable transponders, maintenance is greatly reduced. In vehicle production, for example, stripping paint off transponders is an expensive step that can be eliminated when switching to UHF RFID with disposable labels.

Difficult Radio Conditions in the Production Environment
For radio-based systems, however, industrial production facilities pose special challenges. Typically, readers at materials-handling or production machines are positioned very close together. Due to this proximity, radio crosstalk cannot be ruled out. The physical distance between the objects being manufactured—such as motors—is also very small. Parallel production lines make it more difficult to distinguish between a local object and an object on a neighboring line. What's more, the metallic environment encountered causes problems for radio transmission. 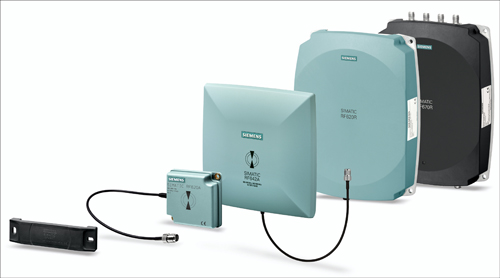 The UHF signal sent by the reader is repeatedly reflected by metallic objects—such as machine enclosures, steel girders, grates or the actual object to be captured (a crankcase, a car body and so forth). These reflections can cause the radio waves to spread in different paths and overlap, thereby leading to undesirable effects, such as dead spots, created by waves canceling each other out, and overshoots (an unwanted extension of the transmission range). As a result, a transponder may not be detected, even if it is located within the reader's coverage area. Conversely, a transponder located outside the coverage area may unexpectedly be read.

As a rule, dead spots can be compensated for by increasing transmission power— which, however, also increases the threat of overshoots. Vice versa, a reduction in transmission power results in fewer unwanted transponders being read, but may also lower the detection rate. To ensure production safety, the RFID system must intelligently resolve this conflict and reliably only identify objects located within the intended, permitted reading area.

New Functions for Reliable Identification
This goal is impressively achieved by new functions in models RF620R and RF630R of the SIMATIC RF600 series, from my company, Siemens. These new functions can be divided into two groups: automatic adaptation of transmission power, and the filtering of reading results via software. In broad terms, the adaptive transmission power assures a high detection rate, whereas the intelligent filters automatically eliminate overshoots. 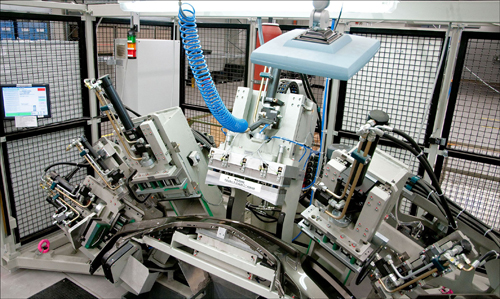 Transmission power is the key element for a good detection rate: Without sufficient power, there is no communication with the transponder, and thus no identification can take place. During the commissioning of the RFID readers, transmission power is usually set in such a way that all test transponders are detected. To be on the safe side, and to offset possible fluctuations in the process, a power level higher than necessary is often selected. The new adaptive transmission power solves this problem by having the reader automatically and gradually increase the power within predefined limits until at least one transponder is clearly detected in the radio path. By not using more power than necessary, the potential for radio interference is thereby reduced. On the other hand, the reader can independently compensate for dead spots and, therefore, significantly increase process reliability.

Should too many transponders now be detected due to overshoots, they must be reliably filtered out without manual intervention. For this purpose, the new firmware offers a multi-stage filter concept that—by means of the radio characteristics of the transponders within the field—can determine whether the transponders are directly in front of the reader antenna, or are detectable only due to overshoots. Key properties here are such values as the received signal strength indicator (RSSI), as well as the reading frequency and the transmission power required.

The RSSI value, which is a measure of the transponder response's field strength, is of particular importance to the filter algorithms. Simply comparing RSSI values from two transponders is not useful, though, since the values are affected by an inhomogeneous radio field. For example, a transponder positioned closer to the RFID reader antenna may have a lower RSSI value than a transponder located farther away. Depending on the requirements, different mechanisms can be activated, from simple limit values to complex statistical filters. In very difficult cases—for example, when the radio characteristics of the desired transponder and the overshoots lie too close together to permit a clear filtering after only one measurement—the "Inventory Threshold Filter" comes into operation. This filter does not decide immediately, but instead monitors the transponders for a predefined span of time. The statistical analysis at the end of the measurement phase then successfully filters out any overshoots by means of various, configurable criteria.

Once a transponder has been clearly identified, the "Tag Hold" function ensures that the reader does everything within its physical limits to maintain communication with the transponder. The device thus assures access to the transponder even in highly dynamic environments—in which, for example, an object's movement positions the transponder within a dead spot. Likewise, writing to the transponder can be specifically safeguarded with that function. Likewise, the "Black List" function prevents the erroneous reporting of transponders that have already been processed. These functions especially demonstrate their strengths in such applications as production lines, in which objects pass by the reader in succession. 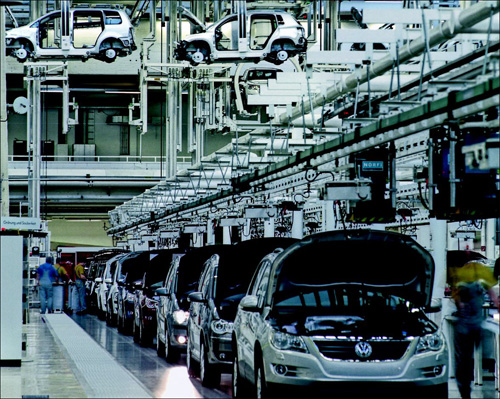 Vehicle production requires the precise capturing of each individual transponder; overshoots (the reading of tags outside the expected range) caused by reflections can lead to expensive identification errors.

A typical production sequence can then proceed as follows: The tagged objects to be identified (car bodies, for instance) are driven past the processing cells on a conveyor—spaced very close together, like a string of pearls. A proximity sensor triggers the RFID reader, whereupon it automatically adjusts transmission power until at least one transponder is detected. By means of the integrated filters, the interrogator makes sure that the transponders detected are not the result of overshoots. Only the desired labels are reported to the controller. "Tag Hold" ensures that the reading and writing of the active data can take place reliably, despite a dynamically changing environment. Once the processing has been completed, the label's identification number is added to the "Black List"—that is, the label is immediately filtered out as an overshoot during the next object's identification.

The Right Antenna for the Application
When choosing the components for the RFID system, the choice of reader antenna is at least as important as the choice of reader. Form factor and technical properties—such as antenna gain—determine the electromagnetic field's propagation. The antenna gain is a measure of the effectiveness of the antenna—and, thus, an important control element for the field's strength or size. Another important antenna property is its polarization (field alignment). It has been shown that linearly and circularly polarized antennas are each suitable for different environments. Application within strongly metallic environments, in particular, can require an individual antenna selection. With the antenna models RF620A, RF640A, RF642A and RF660A, the SIMATIC RF600 portfolio makes it possible to pinpoint a suitably sized device with the proper antenna gain and polarization for the reading points.

Industrial-suited Data Media
For a reliable operation, the data medium's ruggedness is a decisive factor. After all, it accompanies the object throughout production, and must play back the data stored without fail at the last production step and beyond. Technology-wise, there are practically no limits with regard to this requirement: Transponders are available with high IP protection ratings (model RF680T, for example); in addition, smart labels—such as the SIMATIC RF680L—are now available in heat-resistant versions. Special transponders can be mounted on or even flush in metal.

If very high availability is demanded, certified labels can be used, which are extensively tested and only allow for minimal production fluctuations far below the usual range. 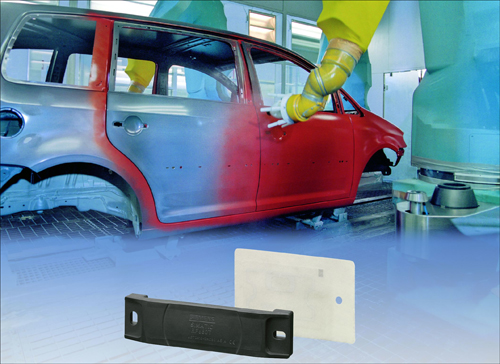 With the heat-resistant SIMATIC RF680L smart label and RF680T tag, it is now possible to continuously identify a car body from construction to painting to final assembly.

Simulation and Testing
To determine the optimal configuration of transponder and physical mounting, a simulation of the electromagnetic fields can be performed in advance. Through this process, problems such as dead spots can be detected early on, and suitable corrective actions can then be taken. During simulation, as many boundary conditions as possible that could affect the radio field should be considered—for example, the shape and material of the objects themselves, as well as the object carrier and materials-handling elements. Existing computer-aided design (CAD) data can be imported into the simulation program. A simulation, however, is always only an approximation of the real conditions, and does not replace a field test.

Made for Industry
The mix of functions optimal for the respective application still must be determined onsite. The new firmware (2.0) for the RF620R and RF630R UHF readers offers a versatile toolbox that provides a high level of process reliability in demanding environments. With this firmware, UHF RFID can now be employed within industrial production environments previously deemed too difficult for the technology. All goals set for reading reliability and automatic adaptation have already been far exceeded by the firmware during a first major project.