The U.S. agency is piloting an automated system for screening carry-on bags and items that uses RFID-tagged bins, linking each bin's tag ID with photo and X-ray images of its contents.

May 27, 2016The U.S. Transportation Security Administration (TSA) is testing an RFID-enabled solution at Hartsfield-Jackson Atlanta International Airport, with the goal of speeding up the security screening process. The automated system, provided by MacDonald Humfrey, is installed at two of the 28 screening lanes that the TSA operates at the airport. A conveyor transports bins directly through the X-ray machines, then routes them to a separate section for further examination if necessary, while the system tracks the items loaded into each bin based on camera images and the bin's passive RFID tag.

Delta Airlines paid $1 million to help underwrite the pilot, which is taking place at the airport's South security checkpoint, used primarily by passengers flying on Delta flights. The pilot will be ongoing this summer, says Mark Howell, a TSA regional spokesperson. The TSA hopes the automated system will increase efficiency by 25 to 30 percent, though he says it will be difficult to pinpoint how much of the efficiency is boosted due to RFID, since that technology is just one element of the new solution. 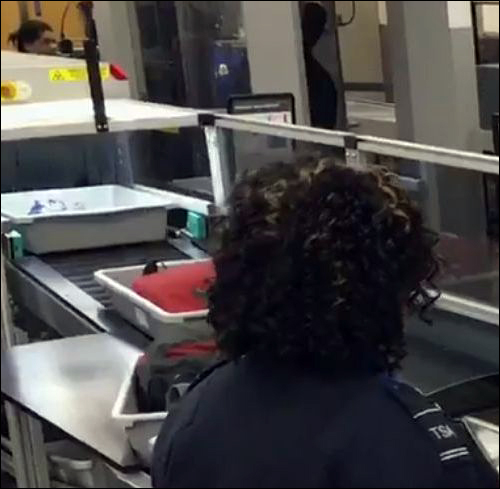 As the bin approaches the entrance to the X-ray machine, an RFID reader captures the unique ID number encoded to the bin's tag, while a camera takes a photograph of its contents.

Airline security wait times have been growing for a variety of reasons, including a reduced TSA budget for staffing and the increased number of carry-on bags that passengers take with them when they board the aircraft. The Atlanta Airport has been recommending that passengers arrive three hours prior to a flight's scheduled departure, though wait times have currently been reported at 30 minutes or less. Similar problems have been reported at most U.S. airports.

Seeking technology-based solutions, the TSA debuted the RFID-enabled experimental lines this week, mere days before Memorial Day—one of the busiest travel holidays of the year in the United States. The TSA expects Atlanta's airport to handle a record 90,000 passengers daily this holiday weekend. The goal, Howell explains, is to test the technology under the high pressure of a busy travel weekend.

First, upon reaching the front of the security line, a passenger can opt to proceed to one of two automated security lanes, each of which has five stations. At the station chosen, the passenger places all items to be screened in a single bin, which is larger than standard screening bins and is intended to hold all of that individual's belongings, including a carry-on bag. The passenger places the bin on the motorized conveyor, and then walks through the personal screening area.

Meanwhile, the bin containing that passenger's items is automatically moved to the X-ray machine, where an RFID reader mounted at the machine's entrance captures the unique ID number encoded to the bin's tag, while a camera simultaneously takes a photograph of the bin's contents. That image and the bin tag's RFID number are linked together.

During the X-ray process, staff members can view the photograph of the bin's contents, alongside its X-ray images. In that way, they can view what is in the bin next to the X-ray details. If the system or employees detect a suspicious-looking shape that merits further investigation, the bin is automatically routed to a different conveyor lane for further screening. At that lane, a second RFID reader captures the bin's tag ID again, so that workers at this location can view the picture taken of that particular bin, based on its tag ID number.

The employees can also examine the items within the bin at a table dedicated to that purpose, using a handheld RFID reader to pull up the bin's photographic and X-ray images. In addition, they can view those details in order to ensure that they are looking at the correct bin. 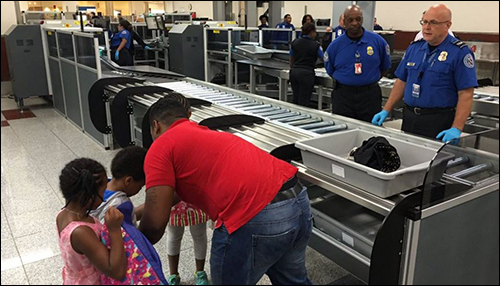 Jacques Jean-Baptiste and his three children were the first passengers screened by the new automated lanes.

Staff members manning the X-ray machine typically do not need to verbally instruct the individuals searching the bags regarding what they should be looking for, because that information is visible to them on the handheld screen. Those searching the bags can also view the area of concern on the screen, and move more quickly to that section of a specific bag, thereby making the search process faster.

The automated conveyor system provided by MacDonald Humfrey is known as Mach-Smartlane, and it includes what the company refers to as Mach-SmartView functionality, consisting of RFID technology, as well as camera images and the automatic rejection of trays, which can be configured by the screening agency. (MacDonald Humfrey declined to provide additional details about its system for this story.)

London's Heathrow Airport has been using the Mach-Smartlane system for approximately two years. According to Howell, the TSA had looked at the Heathrow installation and wanted to try the technology in the United States. Initially, he explains, the solution is being tested only at two lanes. "Our hope is to expand it," Howell states. If the TSA finds that the system boosts efficiency, it would expand the deployment at Hartsfield-Jackson, and potentially to other airports as well. "We're going to look at the data. It's going to be tough to pick out what efficiency gains came from the RFID. But the RF gives us greater accountability from front to end."