Hanmi Pharmaceutical developed an automated picking and shipping system, to ensure hospitals and pharmacies get the medical products they need.

Established in 1973, Hanmi has based its reputation on developing and supplying a wide range of high-quality pharmaceutical products. "The firm currently produces more than 500 different types of medical products, including solid formulation, tablet, liquid formulation and parenteral injection, among others," says Jay Jun, manager of strategy and planning at the company's Hanmi IT division. 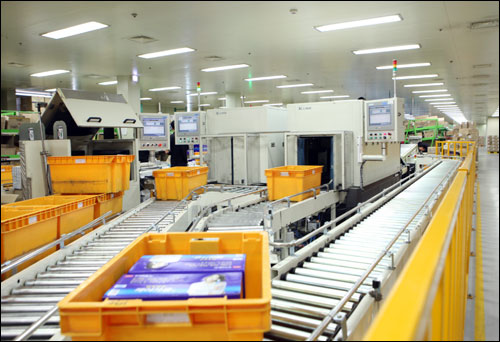 But distributing all those products has been a challenge. Unlike the U.S. pharmaceutical market, which is dominated by three major distributors, the South Korean pharmaceutical market is splintered among hundreds of small-scale wholesalers. Many of these firms lack the ability to fully track and manage inventory shipped to local hospitals and pharmacies. In addition, local customers often bypass distributors and purchase their drugs directly from the manufacturer. Hanmi ships 60 percent of its pharmaceuticals directly to hospitals and pharmacies.

Hanmi wanted to lower its erroneous shipment rate, as well as raise the accuracy and speed of its production processes. The firm also wanted to gain greater insight into a fragmented and sometimes chaotic distribution environment. In 2011, Hanmi deployed a sophisticated RFID-based automated picking and shipping system, to help the company keep pace with customer demand.

Getting Started
Before Hanmi's representatives could begin using handheld readers to inventory customers' stockrooms, the company had to develop an effective and affordable way to RFID-tag its entire product line at the item level. Hanmi's first step toward creating a comprehensive RFID environment was to evaluate the practicality and cost of building such a system and then integrating the technology into its existing production and distribution chain operations. "We started exploring the feasibility and benefit of RFID in 2005," Jun says.

Shortly after the research and analysis phase ended, the committee approved a project cost estimate and applied for government funding. The South Korean government agreed to cover approximately half the project cost, expecting that RFID-generated efficiencies would help curtail soaring pharmaceutical costs and thereby kick a major dent in national health insurance expenses. The government has since mandated that all the nation's pharmaceuticals must be readable via RFID or bar code by 2013. 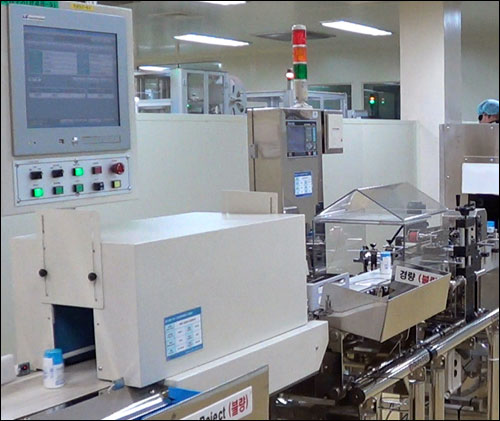 "The complexity of the Korean pharmaceutical supply chain, married with government support, strongly motivated Hanmi to strive to find a feasible solution that could ensure the full traceability of the entire range of its products," Jun says. The company identified RFID as the only technology that could help the firm meet its objectives. "There is an obvious limitation of traceability with a bar-code scheme, and we were seeking something more efficient," he notes. Hanmi IT, already well-staffed with skilled RFID engineers and technicians from other company projects, was charged with implementing the system.

The system was designed to identify products on an item-level basis and then, without the need for any human involvement, collect, box and ship the products. As orders arrive, individual products are automatically picked, sorted and dispensed into a tote. The RFID tags are mechanically attached to each product container during packaging. Once placed into a tote, the items move along a conveyor through a shipment verifier—an LSIS RFID tunnel reader incorporating an Impinj Guardrail antenna. If a product's tag can't be read, the item is physically tapped or blown off the assembly line. The items are then collected and rerouted through a shipment reverifier (another tunnel reader). At this point, a human inspector carrying a handheld reader also may examine the product. If the tag read fails again, the item is set aside for retagging. After the verification process is completed, the shipment is automatically packaged and sent to the loading deck to await delivery to its final destination.

Hanmi IT was also tasked with supplying the system's software. To control complex production-line tasks and processing of the data streams flowing in from the system's readers, Hanmi IT installed its Edge Plus software. A middleware product, UniA Plus, connects the RFID environment with Hanmi's back-end systems. Using the RFID event data collected by Edge Plus, UniA Plus also creates a connectivity environment for various types of client devices, including RFID handheld readers, smartphones, tablets and PCs.

Testing and Tweaking
As the system neared completion, Hanmi began planning a trial to evaluate the system's performance and usability. "During the pilot period, we focused on what RFID does and how it works," Jun says. The company also began studying how the system could be fully integrated into its legacy software, including the firm's enterprise resource planning, warehouse-management and order-management systems.

The trial was both intensive and thorough, Jun says. He estimates that Hanmi IT poured at least 70 percent of its total resources into validating the system's processes and effectiveness. Almost 100,000 tags were used during the testing process to evaluate the performance of readers positioned at numerous locations, as well as to maximize tag placement on various types of pharmaceutical containers.

As Hanmi IT configured and tested the system, it faced challenges that stretched the limits of existing RFID technology. One of the designers' primary goals was to achieve reliable readability with item-level granularity. Yet, with so many different types of products distributed in discrete packaging materials, including metal foil packs, plastic bottles, glass containers and paper cartons, inconsistent read results seemed inevitable.

To surmount this problem, which threatened the success of the entire project, the designers worked hard to find ideal tag locations on all the company's many kinds of pharmaceutical containers—positions that would ensure virtually 100 percent readability. Using a trial-and-error approach, it took the designers nearly six months—and a redesign of some of the containers—to create "ping points" that worked reliably.

"The paper carton container is a good example," Jun says. "The contents inside most cartons consist of tablets or capsules enclosed by metal foil," and the metal reflects and scatters RF signals, making the tag hard to read. "To avoid this problem, we partitioned the container's interior into two compartments," Jun says. The updated paper carton features one metal-lined compartment that safely holds the pharmaceutical product while the other compartment is reserved for tag placement. Testing showed the new design worked as expected, with read rates approaching 100 percent accuracy.

The overall project, formally launched in 2009, was completed and placed into operation in 2011. The system is used at two Hanmi production sites, as well as at the manufacturing facilities of several of the company's business partners. "We have installed the RFID system in our five outsourcing manufacturers and one independent pharmaceutical company, all in Korea," Jun says. A Hanmi production site is China hasn't yet installed the technology.

Keeping Pace With Demand
In the two years since Hanmi deployed its RFID system, the company has improved accuracy and efficiency significantly. But those gains have not come easily. "For the first year, we could hardly appreciate the practical value and effectiveness, nor estimate the substantial cost-efficiency of the system," Jun says. Production actually slowed during the system's first months of operation, due primarily to a lack of adequate worker training.

After months of hard work and some on-the-fly experimentation, Hanmi gradually began to see both accuracy and efficiency improvements in its production and shipping processes. "In terms of efficiency, the biggest change would be to expedite the lead time and streamline the manufacturing process," Jun says. "Previously, the entire checking procedure was executed by hand along with the naked eye, which significantly slowed the process without guarantee of accuracy."

The company's average tag-read success rate has reached 99.9 percent, Hanmi says. Its ordering and shipment process accuracy also has reached 99.9 percent, and its time efficiency has improved by 300 to 400 percent. While cost savings haven't yet been calculated quantitatively, Jun believes that improved order accuracy, a streamlined return and recall process, and fewer returned goods have all contributed significantly to the company's bottom line.

While Jun says the RFID system is meeting Hanmi's expectations in all areas, the company is still looking to make improvements. The firm's plans include deploying a standardized information-sharing platform, dubbed KEIDAS, which Jun describes as a "plug-in type of RFID package solution" consisting of eight EPCglobal standard service components. Set to debut next year, KEIDAS includes a variety of central applications, such as inventory control, product authentication and product expiration date management. "The platform, associated with the EPCglobal standard EPCIS [EPC Information Services], plays an intermediary role in sharing production and logistics events," Jun says.

Hanmi also plans to deploy PRISMA (Precise RFID Item-Level Stock Management Automation), a motorized EPC UHF RFID reader that glides along a rail to automatically locate and count products within a warehouse, distribution center or retail store. Hanmi IT developed PRISMA and plans to begin using the robotic RFID inventory system at its sites, and to offer the system to several of its business partners later this year.

Hanmi has investigated the potential of smart cabinet and smart shelf technology. The company pilot-tested smart shelves at five pharmacies and a smart cabinet at one hospital in 2011 and 2012, but has not yet decided whether to deploy either technology permanently. For now, Hanmi's field representatives are continuing to count inventory at local hospitals and pharmacies using handheld RFID readers.

Hanmi Pharmaceutical and Hanmi IT developed an RFID system that would eliminate weak points in the pharmaceutical maker's production and distribution system, effectively closing gaps through which they'd been losing both effort and money. Jun believes companies in many industries can successfully follow Hanmi's lead, as long as they partner with a systems integrator that understands their unique needs. "To save money and time," he says, "we strongly recommend other prospective companies to fully consult with a company with... hands-on experience."