Mar 02, 2003March 3, 2003 - Part of the fun of going to an amusement park is being scared out of your wits, whether its creeping through a chilling haunted house or racing face-first down the vertical drop of a four-story water slide. But there is one fear parents never want to experience at a park -- the fear of losing a child. Unfortunately, it happens all too often. In fact, more than a quarter of families that went to an amusement park during one 12-month period was temporarily separated from a child, according to a survey by IntiMetrix, a market research company

Dolly's Splash Country, a three-year-old Tennessee water park owned by the country singer Dolly Parton and Herschend Family Entertainment Corp., is one of a growing number of amusement parks turning to RFID to help parents keep track of kids during a visit. The system gives parents piece of mind, so they have a more enjoyable day at the park. And it gives the park a platform that it can use to offer value-added services that can bring in additional revenue.

Dolly's Splash Country sprawls over 14.5 acres and has attractions ranging from interactive play areas for toddlers to extreme water slides for teen thrill seekers. It's common for parents to spend time with toddlers, while older kids frolic in the 25,000 sq.-ft. wave pool or check out the many water slides. Problem is, the older kids don't always remember to come back at the appointed time, or fail to meet at the appointed place. That can leave parents frantic.

"Nothing casts a darker cloud over a day at the park than not being able to find your children," says Gene Scherer, director of operations for Dolly's Splash Country. "We heard about SafeTzone and started talking with them about their system."

SafeTzone is a two-year-old company that uses RFID to track people in large parks. The SafeTzone Child Locating System uses a wristband with an active, or battery-powered, transponder that sends a signal at 303 MHz to one of 22 readers located around the park. The band also has a passive RFID tag that operates at either 134 KHz or 13.56 MHz. (The readers and active transponders are provided by RF Code, a Mesa, Arizona, provider of RFID systems. The passive tags are from Texas Instruments.)

The system is fairly simple, but very effective. Park guests that want the service can pay $2 each for the wristband for a day. It's strapped onto each person's wrist with a tamper-proof strap (it has to be cut off at the end of the day). Each party is registered together, so during the day, anyone in the party can walk up to one of two kiosks strategically located at footbridges in the park, and swipe the low-frequency tag. A reader in the kiosk identifies the person and displays the location of the other members of the party on a cartoon map of the park.


SafeTzone doesn't use triangulation. Instead, it divides the park into logical zones where you might look for someone. A reader is placed in each zone, which can vary from 20 feet to about 300 feet in diameter. The size is chosen based on the concentration of people, number of visual obstructions and other factors. A large zone would typically be used to cover an open plaza. A smaller zone might cover the entrance to a popular waterslide.

The kiosk displays an icon of each member of a party with a time stamp that shows when their tag was last read. So if someone just passed a reader near a water slide, the icon might say Dad, 34 second ago. The system doesn't try to track people in real time because by the time someone got to the area, the person they are looking for would have moved. 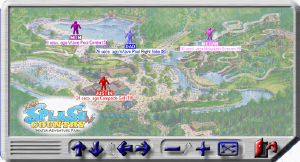 Dollly's Splash Country doesn't try to make money on the system. The wristbands are priced low enough to cover the ongoing cost of supplying them. Scherer says the company's goal was only to provide a better experience for the customer. "This is not a money maker," he says. "This is a guest service. I believe that as people become more aware of SafeTzone, it will become a money maker for us."

Guests that do know about the system certainly appreciate it. "We have gotten as high or higher marks on SafeTzone as anything we've done," says Scherer. "It's very simple to use. It's inexpensive for our guests. They love it."

The system was installed in about 30 days at the start of last season. The park had to dig up some concrete to provide electricity to certain areas where readers and kiosks would be installed. But the readers communicate wirelessly, so aside from power lines, there are no cables to install. The readers are strategically located around the park, but they blend in with the country theme, so they aren't noticeable to visitors. Some are hidden under the eaves of roofs. One is hidden in a canoe that is part of a fixed display.

SafeTzone installs all of the equipment, including servers that gather the data and provide location information. SafeTzone monitors the system remotely via a dialup modem. The vendor's staff spent a week at Dolley's Splash Country after the system was installed to train park employees to use it. The only thing park staff really have to do is register groups together, which takes just a few minutes according to Scherer.

For the coming season, SafeTzone has added some new features to the basic offering and introduced some new modules that can help the park generate more revenue. Among the new features are the ability for the park to send a message to the guest via the kiosk and an amenity locator that can highlight concession stands, bathrooms, phones or an ATM. There is also a new route planner that shows guests the best way to get from the kiosk to another area of the park, and an advertising utility that enables the parks to show ads on the kiosks when they are not being used.


One new module turns the wristband into a cashless payment system. Since the passive RFID tag can store information, guests will be able to store, say, $20 on the RFID tag. The money is charged to the guest's credit card. The advantage is that guests can keep their wallets or purses in a locker, walk up to a concession stand and get a drink simply by waving their wristband near a point-of-sale terminal. The money is deducted from the amount stored on the chip.

The module will go into beta testing next month and should be ready for parks to use by the end of May. "The parks like the concept because they believe that, with the ease of spending, people will spend more," says Regan Kelly, SafeTzone's executive VP and chief administrative office. "The feedback we're getting from the parks is that they expect to see an 8 to 20 percent increase in per capita spending with the use of a device of this sort."

The system reunites parents and their kids

It's something Dolly's Splash Country is certainly interested in taking a closer look at. "We think that is really a neat thing for a water park," says Scherer. "Obviously, no one is carrying around a billfold or a purse. We're very intrigued with the idea that people will be able to go to the SafeTzone booth and put money on the band so they can get a soft drink or meal."

SafeTzone is also introducing a line-management module for parks that have rides that attract large crowds and long lines. Guests will be able to reserve a time on any ride in the park that's on the system at any location station at any time of the day. The system is rules-based, so parks can set it up so that if you book a ride on the roller coaster at 3 PM, you can get on as long as you show up at a special line between, say, 2:45 and 3:15 PM. A reader at the line scans the wristband and confirms to staff that this person is authorized to be on the special line.


SafeTzone has been using TI's low-frequency 134 KHz transponder. The short read range prevents the reader in the kiosk from identifying a person standing nearby. This year, SafeTzone is switching to TI's 13.56 MHz transponder, which is ISO 15693-compliant, for some installations. "The advantage is, if the park is already using 13.56 MHz for something, we can leverage off that," says SafeTzone CTO Marty Crowley. "Or the parks can leverage off of what we install and take advantage of the economy of scale."

That, of course, is a key attraction of RFID technology: Once you install the platform, you can use it for other applications. SafeTzone has a data-management module that enables parks to record and study the buying habits and activities of visitors, so the parks can offer customer loyalty programs, or incentives for underutilized games or attractions. A park could, for instance, create an awards program to lure guests back more often.

Some parks are even integrating RFID into the attractions. Stone Mountain amusement park in Atlanta, Ga., is using RFID wristbands in its Great Barn, a replica of an 1870's-style barn. The tags identify participants in games and record the number of points each person has scored (see Amusement Parks Adopting RFID).

Precision Dynamics Corp. supplied wristbands for "floating lockers" at Six Flags Over Georgia. Guests don't have to be tied to a locker in one area of the park. They can move from locker to locker using information stored in the RFID chip in their wristband. Parks that have a lot of international visitors, could use the RFID tag to identify the language each guest speaks. The park could then create interactive signs that display information in the language of the person standing near the sign.

These opportunities are only just emerging. But Dolly's Splash Country's Scherer is high on the technology. "I've been in the amusement park business for 16 years," he says. "I was a bit cynical about this system being able to provide what they says it provides, but it does. I can't imagine life without it."