Some businesses are starting to use these low-cost tags, while vendors and researchers continue to improve the tags' performance and add features.

Jun 01, 2010The promise of low-cost radio frequency identification tags made with printed electronics has been circulating for years. RFID Journal first wrote about the nascent technology in 2004—at which time analysts predicted functioning RFID tags would be printed in five to 10 years—and then reported on significant advances in 2008.

Today, that promise is starting to come true. The Los Angeles County Metropolitan Transportation Authority is using printed-electronics RFID tags in its disposable, limited-use transit-fare cards. And a number of end users in other industries are testing printed tags for use in applications such as product authentication and promotions. 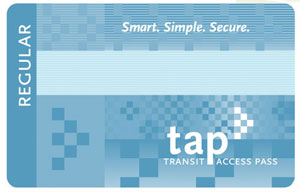 But with the current state of the technology, there are limitations in terms of printing the number of transistors required to perform advanced functions, such as data encryption. The first printed tags to market are passive high-frequency (HF) tags, which operate at 13.56 MHz. (Active tags aren't being printed, though they likely will be in the future.)

Still, HF tags represent the largest part of the RFID market. They're used in myriad applications—from ticketing to tracking laundry and key cards for building access. The greatest short-term potential for printed RFID tags is in applications that use basic, low-memory HF tags, says Peter Harrop, chairman of IDTechEx, a research firm that focuses on RFID, printed electronics and smart packaging.

While many startups and established companies have entered the fledgling printed electronics market, which includes makers of solar panels, displays and medical devices, few are focused on RFID tags. Some companies that did early work to develop printable RFID tags—including OrganicID (purchased by Weyerhaeuser in 2006) and Motorola—have dropped out of the market. But other vendors and research facilities continue to advance the science behind printed RFID. One focus is on developing printed tags with integrated printed sensors. These tags could be printed directly onto packaging or into products, such as consumer packaged goods and pharmaceuticals.


Taking Off in Transit


The printed RFID tags used in the LA Metro transit cards are made by Kovio, a California-based company that launched from the MIT Media Lab, an innovation incubator. Kovio, now backed by more than $60 million in funding, is the first to produce complete printed RFID tags in volume. Kovio will print "tens of millions" of tags this year, says Vik Pavate, the company's VP of business development.

Kovio's thin-film transistor (TFT)—a component of an IC, which contains multiple TFTs that control various functions on the chip—is printed with proprietary nanosilicon ink. The HF tag holds 128 bits of memory, has a read range of nearly 5 centimeters (2 inches) and is compatible with the ISO 14443 air-interface protocol standard used globally for transit systems. 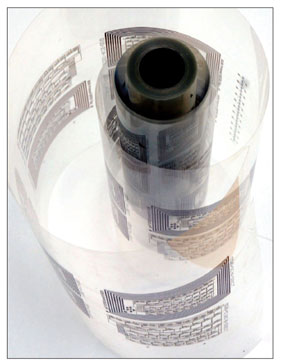 "Over the course of 2009, we performed alpha and beta production runs, tested specific use cases and outlined our focus on [developing tags for] transit ticketing, item-level brand authentication and promotion applications," Pavate says. The company has shipped tags to more than 20 customers, he says, adding that most of those customers are testing the tags in internal pilot programs.

Cubic Transportation Systems, a provider of transit-fare systems and a Kovio investor, is integrating the printed tags in disposable, limited-use transit-fare cards. LA Metro, the first transit agency to use printed tags, plans to issue up to 30 million cards to commuters each year, as it moves to an automated fare-collection system using RFID-based turnstiles.

The printed tags, which are less expensive than silicon-based tags, could help struggling transit agencies meet their bottom line. Of the roughly 600 million RFID-based transit cards in use today in urban transit systems—including those in Atlanta, Beijing, Lisbon, Miami and Moscow—about 450 million are limited-use cards (the remainder are the more rugged cards, akin to credit cards, issued for monthly passes). These cards are printed on a flexible substrate and must be produced at low cost, which makes them good candidates for printed tags, says Walt Bonneau Jr., Cubic's president and general manager. Today, all but the LA system's limited-use cards contain silicon-based tags.


PolyIC, in partnership with chemical companies, printer manufacturers and other key stakeholders, has also been developing printed HF RFID tags. The German company pioneered the use of organic materials—specifically, the polymer semiconductor polythiophen—to print integrated circuits for its PolyID tags. The firm has yet to announce any customers, but it's involved in a number of pilot projects to authenticate products used in medical and automotive applications, says managing director Wolfgang Mildner. PolyIC will start selling evaluation tag samples this summer, he adds.

PolyIC recently entered into a collaboration with Evonik Industries, a maker of printable semiconductor materials; IMEC, a research center that has been developing organic electronics since 1998; and TNO, a Dutch research firm. The organizations are working together, with European Union funding, under the moniker ORICLA. Their goal is to advance the science behind printable RFID tags so they can meet the performance metrics of silicon-based tags. 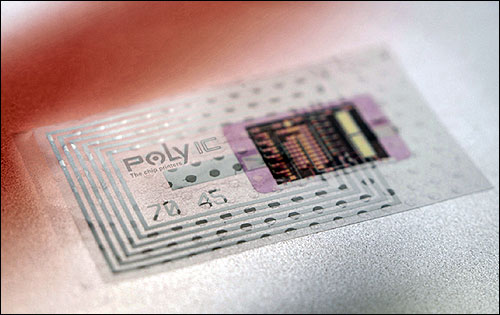 PolyIC, which pioneered the use of organic materials to print integrated circuits, is involved in a number of pilot projects to authenticate products.

One of ORICLA's critical research efforts is to develop ultrahigh-frequency (UHF) organic tags, to compete with the silicon-based UHF tags used in supply-chain operations (which operate from 866 MHz to 960 MHz). IMEC and TNO have proved that they can form rectifiers—key elements of RFID chips—that operate at UHF.

Pavate says Kovio can already produce UHF printed tags, but the company is focusing on HF tags because the market is so much larger. Additionally, printing chips for Electronic Product Code tags or others that require encryption or high-level functionality is beyond Kovio's current capacity, he says. To meet the performance requirements of the EPC protocol, chips need upward of 70,000 transistors.

"Print is particularly effective today when the transistor count is low—say, less than 5,000 or 10,000 transistors," Pavate says. He refers to Kovio's tags as "RF bar codes."

Researchers at Sunchon National University (SNU), in Korea, and Rice University, in Texas, are working together to develop a printed UHF tag that can compete—head to head, but at a lower cost—with silicon UHF passive tags. Gyou-jin Cho, a professor of printed electronics engineering at SNU, says these UHF tags should be ready for commercial use within three years. His team is basing its work on a nanocarbon ink. Inks based on nanosilicon or nanocarbon, important building blocks of nanoelectronics, have a performance advantage over organic polymers because these materials are more conductive and have better charge mobility, says IDTechEx's Harrop.

The SNU/Rice team is already able to print an HF tag with a semi-conductive ink made of single-walled carbon nanotubes produced at Rice. The tag has a read range of 10 centimeters (4 inches) and can be produced at just 3 cents per tag. The printed tag is much larger than silicon-based tags, but Cho is confident he can reduce the tag's size, increase its memory (currently, it can store only up to 4 bits of data), and boost its read range to up to a meter (3 feet).


Cho and the Rice researchers believe that as the printed market matures, they'll be able to print RFID EPC tags that will be inexpensive enough to embed in packaging, and could eventually replace bar codes. They envision a day when supermarket customers will be able to push their grocery carts past an RFID interrogator, which would read all the items, charge their accounts and update the store inventory.

Sensor integration is also on the agenda in Cho's lab. The emergence of printable batteries and sensors has opened the door to the development of a fully printed RFID sensor tag. Today, sensor-enabled RFID tags—which can identify people, places and things, as well as collect environmental data—are based on conventional silicon chips and generally contain nonprinted sensors and batteries.

Cho says the technology already exists to integrate printed humidity and gas sensors into printed tags. His team is working with researchers at the University of California, San Diego, to develop a commercial RFID sensor tag using printing technologies.

Cubic is working with Kovio and other partners to develop advanced printed RFID tags with integrated sensors, Bonneau says. Though he declines to divulge the type of sensors or the role they would play in transit-fare cards, he says the goal is to "address public safety and public health."

Conventional RFID sensor tags are making inroads in smart packaging applications, where they can alert consumers to anything from sales promotions to spoiled food. And in the health field, diabetics will soon be able to use RFID sensor tags to monitor their glucose levels. Pioneers of printed RFID sensor tags have their sights set on these markets as well. "Sensors are a market that is evolving for printed RF bar codes," Kovio's Pavate says. "They have a compelling value proposition in the retail space and other markets, such as pharmaceuticals."