The company is offering an RFID-enabled version of its Genius Jet system, designed to ensure that the correct cartridge is being employed to apply the proper amount of adhesive, filler, paint and other fluid for each job.

Apr 29, 2013Fluid-dispensing equipment company Nordson Asymtek is offering an RFID-enabled version of its Genius Jet fluid-dispensing cartridge that enables customers to automatically track and store the number of cycles that the cartridge has undergone. The technology also enables users to ensure that the correct cartridge is being used for a particular job. The solution consists of a passive high-frequency (HF) 13.56 MHz RFID tag embedded in each cartridge, a reader built into the dispensing equipment, and software in the equipment's processing system to interpret that read data.

Nordson Asymtek offers industrial fluid-dispensing solutions that allow users to eject fluids where necessary onto parts or products. For the past 20 years, the company has been providing machinery that applies fluids, such as liquid adhesives or protective coatings, to products that include circuit boards and semiconductor packages. Its NexJet system can deliver 300 shots of fluid in one second—an improvement of 50 percent over previous jets, the firm reports. The majority of its customers are in the electronics industry; initially, they comprised companies producing laptops and personal computers, but the technology is now being employed by smartphone companies to apply epoxy fill material around the processor chip in the phone, in order to protect the electrical components. 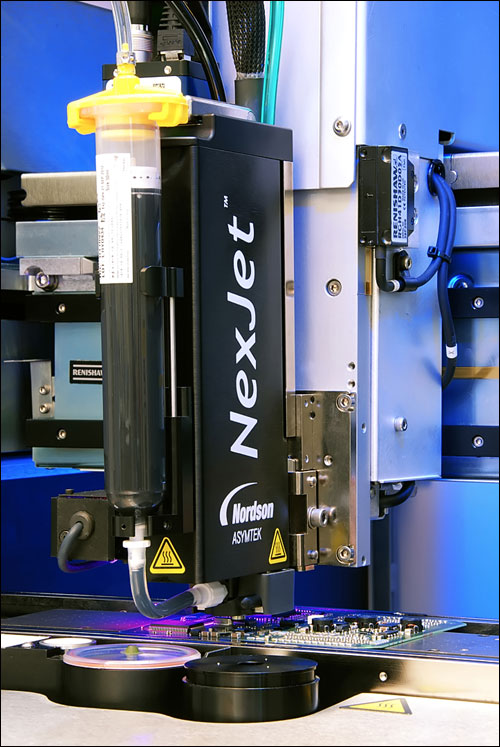 Incorporated in the RFID-enabled NexJet dispenser robot is a Balluff reader that identifies each cartridge, in order to determine if it has enough remaining use life for the job at hand, and that it is the correct cartridge for that process.

An RFID-enabled version of its Genius Jet cartridge contains a passive HF 13.56 MHz Datalogic RFID tag (made with an Infineon Technologies chip compliant with the ISO 15693 standard). The cartridge's tag is read by a Balluff RFID reader incorporated into the dispenser machinery (or robot), to ensure that the cartridge has sufficient remaining use life for the job at hand, and that it is the cartridge designed for that process. The dispensing robot includes a reservoir filled with whichever fluid that needs to be dispensed, along with a pump-like mechanism for delivering that fluid to the cartridge.

Because fluids can affect cartridge quality and dispensing machinery operation over time, the cartridges must be cleaned periodically, in order to ensure that they will continue operating properly. In the traditional jet system, this requires dissembling eight to 10 parts by hand, and cleaning them individually before the equipment is reassembled. This manual process can take considerable time, and because manufacturers typically operate many systems at a single manufacturing site, they need to undergo the disassembly and cleaning processes fairly frequently.

The RFID-enabled version of the NexJet solution allows users to install a disposable jet cartridge into the dispenser equipment. This cartridge can be reused a specific number of times, but requires a much simpler and faster cleaning and maintenance process, since the NexJet cartridge is a single-piece closed chamber that can not be disassembled. Rather, to maintain the NexJet cartridge, a machine operator can remove the single-piece assembly, place it in a cleaner and then reinstall it. This, says Dan Ashley, Nordson Asymtek's market specialist, "makes it much, much easier to use."

Cartridges typically last for several months of repeated usage. However, it can be difficult for machine operators to know when a particular cartridge needs to be replaced or cleaned, and to ensure that they have the correct cartridge for the right job. For each task, specific types and quantities of fluids are required. With the NexJet system, the manufacturing staff input those requirements into the processor built into the injection machine.

For each product it will be manufacturing, an assembly plant creates a recipe listing the types of cartridges required to manufacture that item, as well as the amount of fluid needed. So when an operator inputs a specific job, the machine's built-in software can then link that job to the recipe, including the specific cartridge required. If the machine lacks RFID technology, the operator must visually check the cartridge's serial number to ensure that the correct unit is being used. With the RFID solution, however, a tag is embedded in the cartridge with a unique ID number encoded on it that links to data about that item in the software loaded on Nordson Asymtek's dispensing machinery, such as its part number, serial number and manufacturing date. 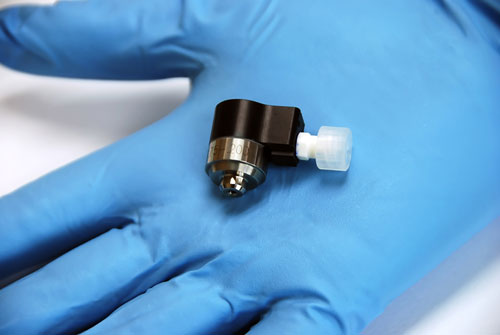 When the NexJet cartridge is mounted on the dispenser robot, its RFID reader identifies the cartridge's tag ID and forwards that information to the software, which stores a record indicating the number of times that the cartridge has been used in the past, and thus knows how many more times it can be utilized before being cleaned or replaced. If the system determines either that the wrong cartridge is being used, or that the fluid level is too low for the user's needs, an alert is displayed on the equipment's screen.

If an assembly plant has multiple fluid-dispensing machines onsite, they will share data via a Bluetooth connection, so that if a cartridge is used on one machine, that event is stored in the software on all machines.

The system not only ensures that the correct cartridge is always in use during a specific product's manufacture, but also provides the manufacturer with an electronic record of which cartridges were used during that job. Thus, if there were, for example, a recall of that product, the company could know the exact cartridges used to apply the fluid on the affected items.