The Otis ONE solution leverages cellular technology, edge-based sensor management and a cloud-based service to provide predictive and proactive service for 300,000 connected elevators, and to share that data with customers.

Jul 11, 2018The Otis Elevator Co. is rolling out an Internet of Things (IoT) solution known as Otis ONE. A part of Otis's Signature Service offering, the system captures real-time data regarding the status and activities of its 300,000 connected elevators across numerous countries.

With the Otis ONE solution, the company can capture predictive data about each elevator's health, then proactively respond to a maintenance problem without requiring notification from a customer, and share data about the elevator's function that goes beyond maintenance. The shared data, in fact, can enable customers to understand how their elevators are used, as well as when and how often, so that they can better manage their facilities and share information with tenants in the building. 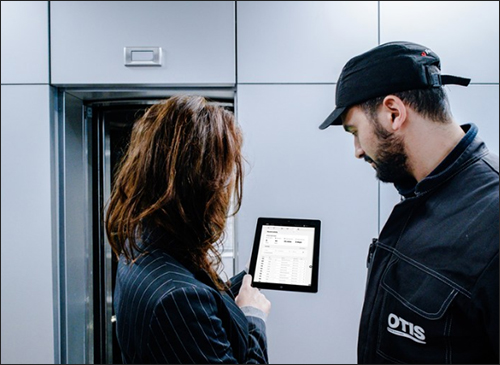 With Otis ONE, the company can capture predictive data about each elevator's health, then proactively respond to a maintenance problem.

Otis, a United Technologies Corp. company based in a Farmington, Conn., is the largest provider of people-moving products, with a total of 2 million elevators and escalators under service (elevators represent the majority of its units). Two billion people are transported by those units daily, the company reports. The firm, which says it created the world's first safe elevator in 1853, has provided maintenance for its customers since 1861. For approximately 30 years, Otis has provided remote monitoring by collecting data about elevators, typically via wired or phone line connections.

Signature Service, the company's new service brand and offering—which launched in May 20180—was initiated internally within Otis about two years ago, with the start of the company's digital service transformation. The Signature Service offerings consist of multiple new features to provide Otis's customers and company maintenance personnel with digital tools to better ensure that elevators keep operating, according to Tony Black, Otis's VP of service business and field operations. In the event of a breakdown, he explains, "Our mechanics and teams now have digital tools to ensure customer elevators are put back in operation quickly."

The service Otis offers is provided from more than 1,000 service branches worldwide, involving a total of 33,000 mechanics. With its Signature Service, the company is using technology to enhance its offering of maintenance and repair, as well as the management of its customers' elevators.

Before developing the solution, Black says, the company asked its customers, as well as its service personnel, to identify their pain points. "With that information," he states, "we've set up a transformation around eliminating those pain points." What the firm has established, Black says, is a global digital ecosystem and platform using a variety of technology-based methods to capture data managed on that platform, in order to ensure that elevators are operating, and that downtime is limited.

The Signature Service solution includes using connected elevators' data to better understand the units' health. Each connected elevator comes with a network of sensors that detect an elevator's motion and location, as well as how well it is operating and when there may be a problem. The elevators could be outfitted with motion detectors, as well as temperature and noise sensors, magnetic switches, stress gauge sensors and cameras as sensors.

The company already collected some of that data at the end of the day or at other specific times, via modems or other wired services. However, with the Otis ONE IoT solution, the data can be captured, managed and shared in real time.

Here's how it works: The sensors measure the elevator's health, and their data is managed in an edge-computing device installed at the elevator. That information is not only filtered for the most relevant content for Otis's management, but also encrypted to prevent access of the information by unauthorized parties. The data is then transmitted via a cellular connection—4G or LTE—or, in some cases, on a facility's existing Wi-Fi network.

Otis ONE offers three key features, says Christopher Smith, the company's VP of service innovation: predictive functionality to identify when a potential failure could occur, a proactive ability to identify when an elevator has stopped working, and shared information with both maintenance personnel and customers depending on those elevators.

The predictive feature includes sensors that monitor the operation of doors. Door malfunctions, Smith says, account for 50 to70 percent of maintenance calls. If an elevator's doors require maintenance, that information can be detected using the sensor data and software algorithms. The system can determine the deterioration level of doors based on vibration and other sensor measurements, as well as identify when door functionality has passed an acceptable threshold. Otis's call center, OTISLINE, receives an alert and can proactively schedule a visit to the site of the problem before the elevator doors fail.

The system also enables operators to know when an elevator requires repair, as soon as the problem occurs. Traditionally, Smith explains, elevator maintenance required a phone call from the facility containing the malfunctioning elevator. That elevator would then need to wait for the maintenance response.

With the Otis ONE solution, however, the control center receives an alert automatically, allowing maintenance to be dispatched immediately. Otis can then contact the facility or property manager to report that repair personnel are on their way. With the sensor data collected at the elevator, the system can also provide key information, such as the likely cause of the breakdown, before the repair staff leaves for the facility. They can then bring the appropriate spare parts with them and be prepared to begin work more efficiently, with less diagnostic time required.

Additionally, the system is designed so that elevator-based data can be shared between Otis and its customers—the elevator users. Using Otis ONE Campus View, authorized individuals can instantly view one or all of their connected Otis elevators in the cloud-based server. They can then not only understand the health of their elevators, but also their operation.

For example, Smith says, they can better understand how the elevators are used, when they are most active and which ones are being used most. They can then use that intelligence to better manage the scheduling of tenant moves, so that an elevator can be dedicated to a particular tenant for the moving process; this could be done during a perceived slow time. What's more, facility managers could share elevator activity information with restaurants or other business tenants, to indicate when most people seem to be using the elevators, and thus when the greatest traffic occurs, which could impact their business.

The system consists of more than just the collection of IoT data from the onboard sensors. For instance, the company has supplied 17,000 of its maintenance employees with an Apple iPhone running a suite of proprietary Otis service apps, including one that uses the microphone and accelerometer built into the phone to capture key data about an elevator's ride quality. The phone is simply placed on the elevator floor, Black explains, and as the lift goes up or down, the phone sensors detect conditions. The app analyzes the measurements to detect any problems and provides near-immediate diagnostic and root-cause information. That system has been available for about six months, he adds.