How To Get RFID Compliant

What does it take to comply with Wal-Mart’s RFID tagging requirements? RFID Journal was given an exclusive look at the rigorous testing of personal-care products at the Sensormatic RFID Performance Center.

Jul 20, 2004Wal-Mart has set the bar high for its suppliers. RFID tags, or labels, on pallets of products have to be read 100 percent of the time as they are driven through a dock door at 8 mph. Tags on cases also have to be read with perfect accuracy after the pallets are broken down and the cases are put on conveyors moving at speeds of up to 540 feet per minute. If a company has dozens of different products, each with its own special characteristics, ensuring compliance can be quite a challenge. 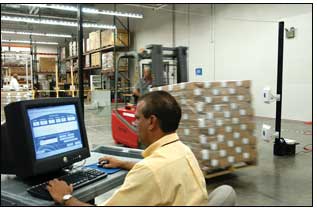 Results of all tests are recorded in a Tyco database

Just how much of a challenge? We decided to find out. Tyco Fire & Security recently gave RFID Journal permission to enter its Sensormatic RFID Performance Center in Boca Raton, Fla. Tyco established the center to help companies achieve compliance and internal benefits from RFID (Tyco acquired Sensormatic Electronics Corp. in 2001). A consumer products company that’s among Wal-Mart’s top 100 suppliers agreed to let us see all the testing that was done on one of the dozens of products it ships to the Bentonville, Ark.–based retailer, but the manufacturer asked us not to use its name or the name of its products in the article.

Tyco has tried to simulate real-world conditions by putting its test center in an area of a functioning warehouse, between a repair center and a shipping and receiving facility. The Performance Center has a wireless warehouse management system, machinery and other elements that help ensure that the results approximate what companies will experience in an operational warehouse.

For this one manufacturer, Tyco spent more than a month running some 13,000 individual tests on 19 pallets of product and 20 individual products (Tyco charges for its services based on the number of stock keeping units a company wants to test). The complete report delivered to its client ran more than 185 pages, including photographs of RFID labels with the proper orientation and placement on the product. Here’s a look at how the tests were conducted.

In this instance, the customer chose the products it wanted to test. For other clients, Tyco will examine a company’s product portfolio and select products that represent the overall portfolio. (If a company ships several kinds of shampoo, there may be no need to test each one separately.)


Once the products were in the lab, the first thing that Ricardo Santiago, Tyco’s RFID field application engineer, needed to do was determine where to place RFID labels on cases of specific products. The label-placement test station is equipped with one of Tyco’s readers, a Sensormatic SensorID Agile 1, with a single antenna. The reader is networked to a desktop computer via TCP/IP. The PC runs software developed by Tyco to control the reader and record the results of the test. Tyco is using Class 1 Electronic Product Code labels from UPM Rafsec, a Finnish company that is one of Tyco’s strategic partners. ADT Security Services, another Tyco unit, is reselling the label as the Sensormatic EPC Class 1 Case Label. 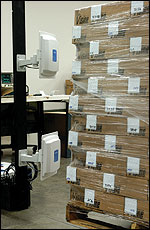 Tag placement is the key to accurate reads

Santiago and his team open the cases of each product and take note of the contents—whether the product contains water or is packaged in aluminum tubes—and the way items are packed in the case. For each individual product, the team determines six label positions on the case that are likely to provide the best performance. Labels are numbered to indicate each position, and its precise location—say, three inches from the top and two inches from the left edge—is recorded in the testing software.

One case is tagged with the label in the first position, and the box is put on a cart with wheels, with the side with the RFID label facing a linear polarized antenna (the radio waves are directed in a narrow beam for longer read range and greater penetration through materials). Santiago reduces the power output of the reader by 30 percent. “Right now, we want to simulate the worst-case scenario,” he says. “We want to determine a threshold.”

The cart is slowly wheeled away from the antenna. The reader attempts to read the RFID tag repeatedly and the software calculates the percentage of success. When the tag can only be read 80 percent of the time, the cart is stopped, and Santiago’s team measures the distance from the reader to the cart. In this case, the tag is read 80 percent of the time from 53 inches. “From this we know that the tag can be read 100 percent of the time from, say, 30 inches,” Santiago says. “The distance is stored in the database, along with a photo that shows where the label was placed for reference and information about the orientation of the tag. In this case, we placed it north to south.”


The test is then repeated with the reader output cranked up to 100 percent to determine the best-case scenario for reading the tag. And then both tests are repeated on a case of the same product with the label in five other positions to determine which position offers the best read range.

Tyco set up two readers to scan tags on boxes on the plastic-chain conveyor, one to control antennas to the left and right of the conveyor, and one to control an antenna above the conveyor and two antennas—set up with a splitter—underneath the conveyor. (Santiago and his team had to replace a metal section of the conveyor’s stainless steel chassis with a plastic one so antennas could read from below.) “We have been doing extensive tests to optimize the system configuration,” Santiago says, “and this configuration proved most likely to read the labels 100 percent of the time on this conveyor. With other conveyors, you might need only one reader with two antennas.” (Wal-Mart has not spelled out details of how it will set up readers on its conveyors, but Tyco believes this setup will be acceptable.)

Tyco has developed software that shows what’s in the detection zone and displays it graphically on a PC. A case with an RFID label in the position that performed best in the label-placement test is put on the conveyor moving at 100 feet per minute to see if it can be read. The test is repeated with the label in each possible orientation (top, bottom, front, back, left and right). The label orientation is changed from north-south to east-west and the tests are run again. All the tests are repeated at 200 feet and 400 feet per minute. And finally, the tests are done again with boxes 6 inches apart on the conveyor, for a total of 288 different tests.

The aim of these tests is to make sure that the tags can be read 100 percent of the time in any orientation. If the results are not close to 100 percent, the position of the label is adjusted and the tests are run again. The results are stored in the database.

Santiago’s team stacks cases of product with the labels in the optimal position (which was determined from the results of the label placement tests) based on the way the customer says it typically builds pallets of the particular product being tested. The pallet is shrink-wrapped and then a pallet tag—similar to the labels used on cases—is placed on the outside of the shrink-wrap. Letters are written to the pallet tag to differentiate it from the case tags. Pallet tags are placed in several locations to determine which is read 100 percent of the time.

The pallet is driven through the portal at 2, 4 and 8 mph. The software tracks which pallet and which case tags are read and by which antenna. Case reads can range from 30 percent to 100 percent, depending on the nature of the product. The percentage is not important as long as some cases and a pallet tag are read every time (the customer may choose to stack pallets with the case tags facing out to improve the percentage of cases read).

The pallet is driven three times at each speed through the middle and to the right and left sides of the portal. “We would like to see the same pallet tag read nine times,” says Santiago. “That way we can determine the best position and orientation of the tag.”

Each of the tests described above—from the label placement to the dock door—were done for 20 individual products. Some products were relatively easy to tag; others were more challenging. “In some cases, after we ran the portal test, we had to go back and rethink tag placement because we felt the read rates just weren’t good enough,” says George Reynolds, Tyco’s VP of RFID. “Some products that come in small aluminum tubes were a real challenge.”

Read rates on one pallet moving through the portal at 8 mph were as low as 1 percent. Eventually, Tyco’s engineers were able to work with the customer’s packaging experts to come up with solutions that should enable the customer to comply with Wal-Mart’s mandate for all 20 of its products. And that, in the end, is what really matters.