BIH adopted RFID to save costs and improve customer service.

Mar 27, 2016The Blanchisserie Inter-Hospitalière (BIH) de Saint Germain-en-Laye laundry service provider had a problem on its hands. The company cleans 20 tons of laundry daily, including sheets, bed pads and uniforms, for 20 public hospitals in the Ile-de France region (near Paris), and it was losing some 50,000 sheets annually. Replacing the linens was costing the public hospital system, part of France's national health system, roughly €250,000 (US$272,000) each year.

BIH performed random hand counts on soiled linens as they were returned. When major differences arose between what was sent out and what came back, additional hand counting was required. "We were losing 25 percent in our productivity," says Luc Videau, BIH's technical director. 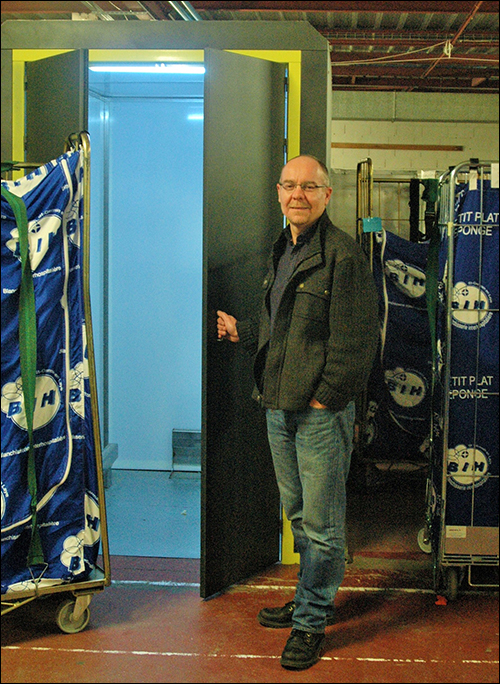 Moreover, Videau says, the manual counts could not reveal why there were differences between what was shipped and what was returned. These differences might have been true losses, or a hospital might have been retaining high stocks because it had not used all the sheets. "We had only one physical, formal, manual hand count per customer each year," he says. "We were then seeing that the amount of linen bought during the year had disappeared. The linens were supposed to last two to three years." The losses were paid for by the hospitals through higher service fees that had to be charged to cover those losses.

Finding a Solution
In 2011, Videau began seeking an RFID solution to automate the tracking of sheets. He was familiar with a high-frequency system for monitoring hospital clothing, and he had heard about and wanted to explore an ultrahigh-frequency solution. In early 2012, he tested the RFID-tagging of some linens, but the supplier's UHF tags could not stand up to repeated washings and dryings at high temperatures. Still, he says, the idea of tracking the linens using RFID was appealing.

In December 2012, after conducting some research, Videau invited six RFID providers to present proposals to the directors of the centralized public hospital system. "UBI Solutions was the only company with another customer having experienced a solution within the same area," Videau says, so BIH decided to test UBI's tags for its own operations.

The tags proved resistant to the harsh laundry environment, and that was enough for BIH to move forward with the project without carrying out a formal test run. No one, Videau adds, objected to the costs, based on the projected savings from not having to buy so many new linens. 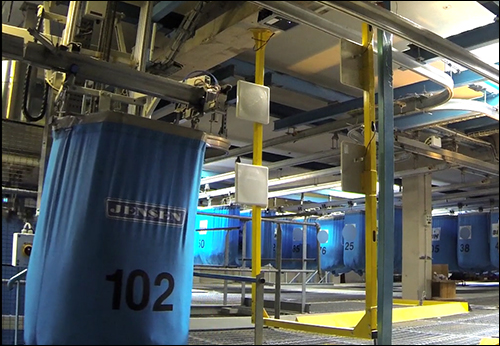 Soiled linens are returned to BIH in large "sling" bags, which are hung on a conveyor and identified as they pass a read area.

The UHF EPC Gen 2 RFID tags were first supplied by Deister Electronic, and now BIH is using Datamars' Textile ID tags. Each tag weighs less than 1 gram (0.04 ounce) and can withstand temperatures ranging from -40 degrees to +120 Celsius (-40 degrees to +248 degrees Fahrenheit). The tags, which also can withstand typical laundry chemicals and sanitizers, are designed to last through 200 cycles of washing and drying, or roughly three years of use.

UBI worked with BIH to determine where to place the tags on the sheets so they would not affect patient comfort in any way. The tags go to the textile supplier, where they are sewn into the sheet hems as part of the production process.

The Laundry Cycle
The RFID solution was designed to work with the existing flow of laundry into and out of BIH's facility. To track clean linens, BIH installed an Impinj Speedway Revolution RFID reader and multiple antennas in a reading cabin, which resembles a large, freestanding wardrobe. Rolling trolleys with bags of as many as 500 (though typically about 150) folded, tagged sheets are pushed into the cabin. A worker closes the doors to the cabin and uses an integrated computer screen to take the reading and assign the sheets to a hospital.

The UBI-designed multiplexer combines signals from the anntenas and then sends that data to the reader. UBI Manager middleware sorts and filters the data. The closed cabin is needed, Munier says, to keep the reader from picking up information from tagged sheets on other nearby trolleys. "It is important to isolate this information as it leaves," he explains, "because that reading tells us where the sheets are going." 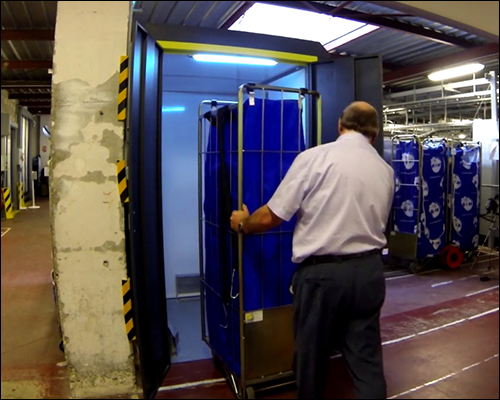 To track clean linens, BIH installed an RFID reader and antennas in a reading cabin resembling a freestanding wardrobe.

Soiled linens are returned to BIH in large "sling" bags, which are hung on a conveyor and identified as they pass a read area equipped with a Speedway reader, multiple antennas and a multiplexer. It is not as necessary to isolate this read, Munier notes, because it is sufficient to know soiled linens have been returned to the BIH facility.

BIH uses UBI's Cloud software as a service package. Videau worked with Munier to determine what information or key performance indicators BIH wanted to glean from tracking the sheets. Some of those indicators are:

Videau says it's easy to access this information in real time. The stock count for each customer helps track linen hygiene. "Knowing the number of days of stock (at each hospital) helps the hospital manage hygiene," he says. "The longer an item is stocked, the higher the risk that the hygiene chain is not respected." The immobilization rate, as this is called, decreased from 8.5 days to 7.5 days.

Two hospitals purchased UBI handheld readers called Pads (the device looks a bit like a solid tennis racket), to track the distribution of sheets to different departments (one hospital, for example, has 25 departments). Data is uploaded from the handheld devices to a Bluetooth-enabled tablet or smartphone, and is then forwarded to the main database in real time via the Internet. Key personnel at hospitals have access to this information for their own hospitals, so they can monitor, in real time, the status of their linens in all departments. A third hospital plans to begin RFID-tracking sheets by the end of 2016.

Implementation took approximately three months, Munier says, while training BIH employees to use the new solution took only one hour. UBI explained how the operation worked, and then taught them the additional step of pushing clean-linen trolleys into the cabin, and using the integrated computer to activate the reader and take the count. "Training hospital staff members to use the UBI Pad is fast because the tool is simple," Videau states. 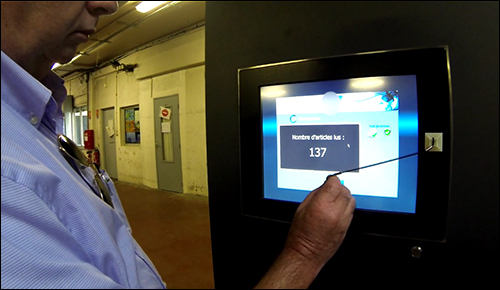 After pushing a clean-linen trolley into the cabin, a worker uses the integrated computer to activate the reader and perform a count.

Cleaning Up
The RFID solution has enabled BIH to identify where losses occur and, in the hospitals where the UBI Pad is used, which departments in those hospitals is directly responsible for losses. "Now, it is clear that the responsibility lies with the customers," Videau says. Before adopting RFID, he adds, the customers were convinced losses occurred at the laundry facility.

BIH will not disclose the project's cost, but Videau says, "I can only tell you that the ROI of all the investment was less than one year." The hard numbers BIH is able to report include a sheet return rate of 95 percent. "After three years of implementation," he reports, "the BIH textile purchase amount was reduced by 25 percent yearly, while maintaining the same volume (of linens) in circulation." The project's goals included reducing the price of the service to the public health system by decreasing loss and increasing the accuracy of delivery. Those goals were resoundingly met, he says.

RFID technology improved the customer relationship as well, Videau says. "Today, we know the real consumption of each of our customers," he states. "We can then adapt delivery to their needs. We can then provide a better service," making sure clean linen is always in stock for each department at every hospital. Videau works with hospital personnel to help them better manage their linen usage.

According to Videau, the system has proved so successful that BIH plans to expand the project early this year, by RFID-tagging the patient shirts and bath towels it launders for several hospitals.