BiosGroup's intelligent software agents could play an important role in supply chains by responding automatically to information coming from RFID tags and readers.

Jul 08, 2002July 8, 2002 - A lot of companies talk about the importance of real-time data. But up-to-the-minute information is useless unless you can act on it immediately. Despite what most software vendors say, very few products on the market allow companies to react instantly to sudden spikes in demand or a delayed shipment from a key supplier. But that’s about to change.

BiosGroup, a Santa Fe-based consulting and software development company, has been working for the past year with SAP of Germany to develop an inventory early warning agent. The system, which is already being piloted by SAP customers, studies patterns and learns to anticipate when a store might run out of a certain item. It then provides a list of possible options to remedy the situation.

SAP demonstrated the system at SAP’s Sapphire user conference in Orlando in early (see SAP Demos Supply Chain of Tomorrow). The demo featured half a dozen 200-ml bottles of Jack Daniel’s sitting on a small smart shelf. When the shelf recorded more purchases than the consumption plan had forecast, the smart agent signaled SAP’s Advanced Planner & Optimizer, which could arrange for more Jack Daniel’s to be sent from a distribution center, or even a nearby store.

"The Sapphire demonstration was a little simplistic," says Brian Potter, who spearheaded BiosGroup’s development work for SAP. "The real capability of the agents is based on getting information over time. They begin to learn based on historical information."

The agents use decision trees, cluster analysis and other techniques pioneered by early artificial intelligence systems and widely adopted by data mining and business intelligence software. An agent might, for instance, assign a particular weighting to a supplier’s likelihood of delivering on time. If the supplier is late more often than the agent expects, the weighting is lowered. Agents can continue to adjust so that they can forecast events, allowing retailers and suppliers to avoid problems, instead of just reacting to them.

SAP began looking at agent technology around the same time it was encouraged by Procter & Gamble to join the Auto-ID Center. RFID technology perfectly complements agent technology because agents are only as good as the data they are acting on, and RFID systems can provide far more accurate information than anything currently available. For instance, when unloading a truck with dozens of different items from P&G, a retailer might not scan every bar code. But the tags would automatically be read when the items are transported through a doorway at the back of the store.

BiosGroup sees a world in which agent technology is distributed throughout the supply chain and reacts instantly to information coming from RFID tags and other systems in stores, distribution centers, and factories. An agent running on a PC in a store might, for instance, communicate with an agent running in a supplier’s distribution center. The store agent might examine data from RFID readers on shelves and at the checkout counter and forecasts that the store will run out of Coca-Cola in two days. The DC might not be able to send more Coke right away, so the two agents might negotiate the most suitable time of delivery and price for both parties.

"You clearly need more agile software to react quickly to data you are collecting in real time," says Fred Seibel, BiosGroup’s VP for supply chain technologies. "Intelligent agents are intended to bring that agility to the environment. They really complement the availability of real-time data from RFID tags."


BiosGroup was established in 1996 as a joint venture between the Center for Business Innovation of Ernst & Young (now Cap Gemini Ernst & Young) and Dr. Stuart Kauffman, a co-founder of the Santa Fe Institute. The aim was to pioneer the use of complexity science – made famous by James Gleick’s book Chaos -- to solve complex business problems.

Complexity science is essentially the study the operation of complex systems – weather, economies, markets, supply chains and so on. BiosGroup breaks a system down into its components and builds software modules to represent each one of the components. The modules are programmed through rules to behave in certain ways. The company then assembles the components in the form of a model or simulation that can be used to study behavior of the system or as a reference for how the system should behave.

The company has done this sort of work for 60 Global 1000 companies. About two and a half years ago, Procter & Gamble had just completed a project it dubbed "The Ultimate Supply System." The aim was to reduce inventory and cycle times by deploying the most sophisticated supply chain technologies available. When the company had gone about as far as possible, it began looking at less conventional approaches to supply chain optimization.

By coincidence, a consultant from Cap Gemini Ernst & Young saw a book by Stuart Kauffman on the desk of a vice president of logistics at P&G and told him about the BiosGroup and its relationship with the consulting company. Introductions were made and P&G wound up hiring BiosGroup to model its supply chain.

At the time, conventional logistics practice was to encourage customers to buy full truckloads because it is more efficient for suppliers to deliver full loads. So P&G, like other manufacturers, gave customers incentives to buy full truckloads. Using the software models, BiosGroup showed P&G that by allowing retailers to order trucks that were not quite full, P&G would get a clearer view of trends in demand, which meant it could reduce inventory and save money.

"We built some models that showed the importance of having a reliable signal from the store that is transmitted upstream through the retailer and on to P&G," says Seibel.

P&G was so impressed it acquired the rights to 10 percent of BiosGroup. But P&G realized that in order to implement some of the suggestions BiosGroup made, it would need a new kind of software. P&G chose not to invest in developing the technology in-house, but introduced SAP to BiosGroup.

BiosGroup’s Potter and Seibel went to SAP’s headquarters in Walldorf, Germany, in the spring of 2001 to figure out where agent technology would have the biggest impact. They settled on an early warning inventory agent, which monitors consumption, compares it to the consumption plan, and forecasts out of stocks. This is an attractive solution because out of stocks average about 8 percent in the United States.

The agent can recommend steps for supply chain managers to take. It also factors what actually happened into its weightings for making future predictions. And it uses the deviation to see how accurate its prediction was. Over time, it evaluates its own performance. If the agent’s accuracy rate falls below a preset rate, the agent will rebuild its model to create more accurate predictions in the future.

The inventory agent has been delivered to SAP, which is working on integrating it with existing products. BiosGroup also delivered a framework that supports the agent. There is a directory service that lets agents look up other agents based on an ID, or on their capabilities and attributes. The company also created an agent development kit that SAP customers could use to create new agents. 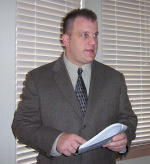 The terms "software agent" or "intelligent agent" have been around for a while. Some consider bots, which comb the Web fore specific data, to be agents. But the software agents being developed by BiosGroup and others are different in that they are designed to act on information that human beings once acted on.

The famed MIT Media Laboratory has a Software Agents group. Its Web site says software agents are different from conventional software in that they are "long-lived, semi-autonomous, proactive, and adaptive." Carnegie Melon University also has a software agents lab.

This kind of work will likely get more attention if SAP’s adaptive inventory agent proves popular with its customers. To some extent, the value of agents may depend on the success of low-cost RFID. If companies are getting reliable and timely data from shelves, point of sales systems, distribution centers and warehouses, they will be more likely to entrust routine decision-making to software. That would transform the way supply chains operate.

"You will have an agent sitting close to the RFID reader on a shelf," says Seibel. "Instead of informing, say, Compaq that a computer was just sold, it would also inform everyone up the supply chain. So the companies that make the display and the hard drive and the CPU all know the rate at which their goods are flying off the shelves as well."

BiosGroup is working on other agent technology with SAP and with other customers. It’s too early to say how those agents might play in the supply chain. But there is clearly a lot of opportunity. For instance, a great deal of ink has been given recently to something called supply chain event management – the ability to react when things happen outside of what’s expected. Agent technology could transform event management, according to Seibel.

"Using intelligent agents is a way to put event management on steroids," he says. "It gives you an opportunity to react before the truck is late because you know the guy is typically late and you’ve already prepared for that possibility."

Other areas where agents could play an important role include forecasting changes in demand created by promotions, and planning replenishment of retail stocks and production schedules at manufacturing plants. The biggest impact could be in facilitating collaboration between suppliers and manufacturers as well as manufacturers and retailers.

Collaboration has been the big buzzword for more than a year, but few companies are doing it. The reasons are cultural more than anything: employees have been trained not to give away any information about the company’s operations. BiosGroup believes that agent technology may make it possible to share select bits of information that are especially useful for coordination.

"You don't have to turn over your entire business plan to your supplier to improve the coordination between his manufacturing schedule and your delivery schedule," says Seibel. "We’re eager to find a partner to move forward on this front because we have a sophisticated multi-dimensional optimization engine that is exactly the tool that would be needed, assuming two players up and down the supply chain would agree to exchange some basic information about their internal schedules."

Bob Betts, SAP’s senior VP for global supply chain, says his company is taking a cautious approach to implementing agent technology. SAP wants to be sure the technology is robust enough to scale for customers like P&G. SAP also wants to study how agent technology might impact other systems customers are running. But clearly, the world is a step closer to an adaptive supply chain network that reacts to real-time data.

"BiosGroup has been critical in providing the deep logic required in complex agents." says Betts. "We will continue to work with the company over the next year on specific customer projects and in the development of further logically complex agents."

RFID will work hand in hand with these agents, according to Seibel. "The future supply chain is going to look more like a nervous system, sensing and reacting to changes in the environment," he says . "It’s clear that RFID is going to be one of the main sources of sensor data. It plays perfectly into distributed problem solving model, where the agents are spread around and can communicate across the boundaries of organizations and make the whole thing flow much more smoothly."